Could Your Cat Have Cystitis?

by vomkompass July 4, 2021
Cystitis is a feline lower urinary tract disease that affects the urinary bladder and urethra of many cats. Cats that suffer from the condition usually display a frequent and strained pattern of urination as if an obstruction is present – however urine is in fact being produced frequently in small amounts.

A number of causes of cystitis exist, including:
Cats are far more prone to cystitis than other species such as dogs due to their shorter urethra which enables bacteria to ascend from the perineum to the bladder with greater ease. Female cats are more likely to be affected than males.

Diabetic cats are prone to the condition particularly due to the higher level of glucose and protein in their systems. These substances promote bacterial growth in urine, leading to a higher risk of infection.

Another at-risk group are senior cats that usually drink less water than younger felines. This results in concentrated urine with higher levels of bacteria present, increasing the chances of infection. Likewise, sensitive cats who hold off urinating due to stress, a dirty litter tray or a refusal to go outdoors due to rain can be affected as their urine becomes increasingly concentrated the longer they wait.

As mentioned, frequent urination of small amounts is the most telling symptom of cystitis. Other symptoms are:
Cystitis is a serious issue that must be addressed immediately as failure to act in a timely fashion can lead to death. A veterinarian can generally diagnose the condition from the above symptoms, though may also use other methods such as urinalysis, ultrasound or bacterial culture to identify the issue.

Treatment is dependent on the individual case. Generally the cat will be encouraged to drink increased amounts of water and be put on a wet food diet to further increase water consumption. A course of antibiotics may also be prescribed as well as painkillers of corticosteroids to reduce inflammation in more serious cases. In an emergency situation the bladder may be emptied using a syringe by a vet as well and fluids inserted intravenously into the cat’s system. 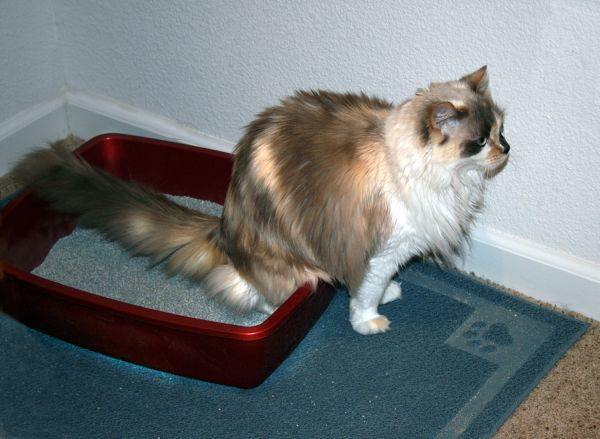 Dogs And Their Stinky Breath

Signs of Dog Cancer That You Should Never Ignore