Every cat is unique. Each has his or her own traits, personalities and habits. Some may even have the very dangerous habit of chewing on power cords. This is often a bad habit picked up as a kitten, and as a responsible cat owner it’s up to you to prevent this from happening.

It is no secret that playing with electrical cords is very dangerous, can cause electrocution and even death. So before even bringing home a kitten you should cat-proof your home. This means putting away any electrical chords that don’t need to be out and managing the ones that do so that kitty doesn’t see them as their new chew toy.

Things like the fridge, dishwasher or washing machine can’t be avoided, so just ensure that there isn’t too much of a gap between the wall and the large appliance for your kitty to get to them. Other smaller appliances such as TVs, kitchen appliances and even computers should be switched off at the wall until your kitty can be trusted not to chew on them.

Smaller portable items such as phone chargers should be put away so they are out of sight for kitty. Because they are smaller, twine-looking cords they are bound to catch their attention so save your charger and kitty and put them in a drawer when not in use.

Don’t overload your powerboards or double adaptors, not only is this a fire hazard but with the extra power being used this could do some serious damage to your cat.

If you ever see your cat knawing at a cord you should firmly tell them ‘no’ so they are aware that chewing on them will result in a negative response from you.

If your cat gets an electrical charge or is electrocuted take them to a vet immediately. 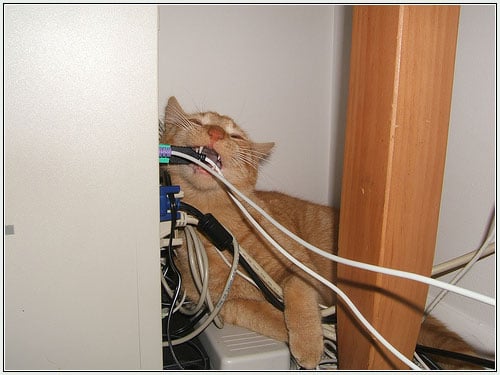 Should You Feed Your Cat Offal?

How Containment Systems Can Be Useful For You And Your Cat

How to care for a senior dog who’s...

How to teach your dog to stop barking...