How to teach your dog to stop barking at strangers

Some dogs have a habit of barking at strangers, but you can help Fido master social etiquette by understanding the reason behind his behavior.

How to teach your dog to stop barking at strangers

Whether it is excitement, fear or being territorial, some dogs have a habit of barking when strangers walk by. To put a halt to his habit of harassment, it is important to find the underlying cause behind Fido’s excessive barking and address what he is trying to say.

Some dogs are simply excited to meet a new potential friend and are expressing joy when they bark at passersby. These social butterflies will exhibit other friendly behavior, such as a wagging their tails and showing a comfortable demeanor. Other pets, however, use their voices as warning signals to passersby to stay away from their owner or home. You can tell your companion is letting out territorial cries if he only vocalizes at others as they approach you or your house and shows other on-edge body language such as being highly alert with his ears pricked forward and tail raised high. Still other dogs bark at people passing by due to a lack of socialization and fear of the unknown. When dogs have been under-exposed to other people, they often appear timid and may even growl as unfamiliar humans approach in an attempt to save their space.

After you have identified the basis behind Fido’s barking, you can begin to address the problem. Start by showing your pet that shouting at strangers will not lead to what he desires most, which in the case of friendly pets is attention. Practice this by asking a friend who your dog does not know well to pose as a stranger. Have this “stranger” walk by, ignoring your pet as he barks or lunges at him or her—safely on a leash, of course. Any time your dog remains quiet, have your friend reward him with a treat. After a few practice rounds, your pet should begin associating a calm demeanor with a tasty treat. Likewise, under-socialized pets will benefit from gradually meeting new people and learning that they are not a threat. Your friend can help with this by gradually interacting with your pet more and more and offering him treats. If your dog tends to be territorial, be sure to keep him on a leash and maintain a confident demeanor, showing yourself as his “pack leader.” Practice obedience training and reward calm behavior with treats and praise when he does not assert himself by barking at a stranger.

Other techniques for teaching Fido to behave calmly around new people include distracting him from the situation. When your dog begins to bark at a new face, immediately get his attention by making noise. Once you have his attention, continue the diversion by asking him to sit and stay. Reward him with a treat and praise as soon as he successfully executes the command, and soon you will be ready to practice greeting a newcomer politely. Ask a stranger—or your friend posing as one—to approach your pet after you’ve given the “sit” command. If he remains calm in the sitting position, reward him with a treat. If, however, he stands up or begins to bark, give the command again and do not offer any praise until he is sitting calmly. This will take some practice, so be patient with your pet. If possible, explain the training process to someone and enlist their help as your dog’s social etiquette with strangers improves over time. 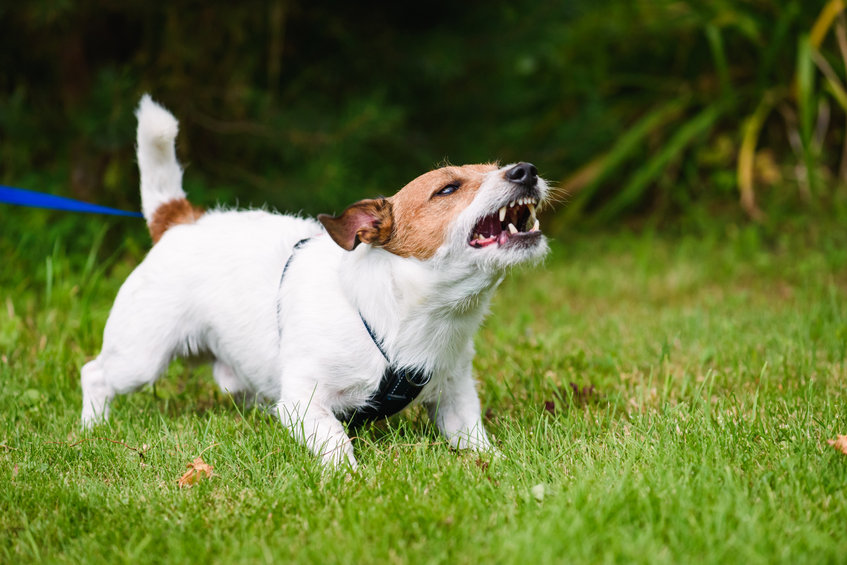 How To: Choose The Right Bowl For Your Dog

Should I walk my dog off leash?